There’s a lot of talk about body positivity these days; women realizing that the so-called ‘ideal’ is just that: so-called. It is possible to love yourself if you’re underweight or overweight and we should love ourselves and our bodies, but we should also make sure the body we love is a healthy body – no matter the size.

“The idea of what a great body is has evolved just as humans have evolved; almost as if it’s a trend to be thin or to have curvy hips. But one thing is for sure, women often want the opposite of what they are. It is so crucial to first love yourself for who you are. But I believe in striving to be my best self, day in and day out.

I have always been naturally thin. Growing up, I was always teased in school. People would call me anorexic and bulimic among other cruel names. I’d get the ‘someone get this girl a double whopper’ spiel. People thought I was incapable of doing certain things for fear I would ‘snap in two.’ I won’t lie to you and say that I didn’t enjoy being thin or that I didn’t have the goal to wear the same size jeans from freshman year through senior. But in my mind, I was healthy and I was happy with the way I looked. All while eating whatever I wanted and every two hours.

I stayed that way until after my freshman year of college. That is when it became socially popular to shame thin women for not being ‘real;’ the new ‘real’ woman had gigantic boobs, a big butt, and nice ‘toned’ legs for days. I was sitting down at work one day and the CrossFit games were on television. Though the women on the TV didn’t have all the features stated above, they had exactly what I wanted. They were strong and beautiful; their bodies were fit while still having curves. They could throw around weight, run fast and defy all challenges they put in front of them. That night, I decided it was time for me to gain some weight and become like them. I started doing CrossFit in October of 2013 and I never looked back.

My starting weight was 95 pounds while standing at 5’ 9” I was working out every morning at 6 a.m. for my first year and a half. My body fat was around 7 to 9 percent and I had almost nothing to transform into muscle. It has taken me three years to gain 45 pounds in lean muscle. This has only been achieved because of my nutritional changes and dedication to working out between three and five times a week. It has been exceptionally hard. I had braces for two of these years that prohibited me from eating a lot of good foods. I have had injuries that set me back and not allowed me to work out. And I have suffered through a deep depression that took away my will to get out of bed in the morning to do anything.

But now my braces are off. I am injury free (for the time being; I am extremely clumsy) and while you don’t just suddenly stop having depression, mine is at bay. I was able to pull myself through and realize I am capable of accomplishing whatever I want. I deserve to be happy and take part in my life.

I won’t say I don’t still have problems getting to the gym or that I don’t sit down with some Ben and Jerry’s and go to town, but today I am better than I have ever been. I am happy with body and I love the way my life is going. CrossFit has given me a love for myself that I never had before.” 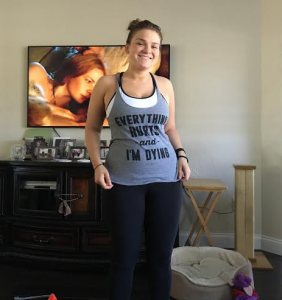 “I believe that we should be able to love ourselves regardless of our body type, but that is also something that society has to work on as well. Regardless of our weight I do think we should always look out for our health, not just to be fit or skinny, but to make sure that our bodies are in proper working condition.

Growing up I was always the chubby sibling, I still am really, but not even because I was that overweight, it was just because I had some tummy fat compared to my naturally-skinny sister and body-builder bother. Don’t get me wrong, I’ve never blamed how I feel about myself on my siblings, but when I would go to my sister’s modeling shoot and I would ask my mother, Why I couldn’t do what she did? Why didn’t they want to take pictures of me too? She’d say I wasn’t the ‘look’ they were going for. That wouldn’t really help my self-image. But what does that even mean? If someone looks good in your clothes wouldn’t you want them to advertise your clothes for them regardless there size? So that would really get to me, it still does actually. Even where I’m working now we only hire pretty people; which is completely ridiculous, but they say it’s because ‘They’re not the look we want,’ but then at the same time we also do modeling shoots for our clothing line and they’ve asked multiple coworkers of mine to do a shoot but never me. So once again I’m not the ‘look’ they’re going for. It’s like I’m pretty enough to model but not pretty enough to represent their brand. It may not feel like a big deal to some people, but it really gets to me sometimes.

Currently, I am working out and doing Pilates classes. I usually go four times a week early morning and later in the day. I won’t lie about it; I started working out for the wrong reasons. All I wanted was to look a certain way so everyone would find me beautiful. I wanted to be accepted by everyone around me. It took a while to realize that it shouldn’t matter what anyone one else thinks of me; if people really would look down on me cause I’m a bigger girl, those aren’t the kind of people I want in my life. I am now more comfortable in my body then I have ever been; once I let go of the notion of what I should look like and stopped stressing about what I’m eating, I became so much happier. I do Pilates now to keep me heathy and happy. It took a very long time for me to be happy with myself, and I’m not all the time – everyone has their off days – but it’s a work in progress that one day I hope will be completed so I can truly love myself without any regards.”