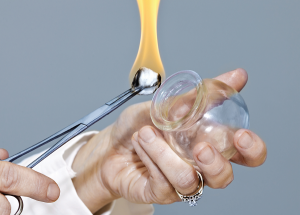 If you watched the 2016 Rio Summer Olympics, you may have noticed swimmer (and most decorated Olympian ever) Michael Phelps and other athletes with round dark purplish marks on their shoulders, torsos and backs. One athlete, a female Chinese swimmer had her back peppered with the mysterious bruise-like circles. It turns out there’s no mystery: these marks are from cupping, a centuries-old healing art. Some claim it has no proven medical value as a pain reliever, but that argument hasn’t fazed proponents and practitioners over the millennia.

Cupping is an ancient therapy where heated glass cups are placed on the skin on the “meridians of the body” thereby creating suction to stimulate energy flow. Cupping was practiced by the Egyptians, Chinese and other ancient Middle Eastern cultures as early as 1,550 BCE.

The ancient way had a practitioner put herbs in the cup, light it on fire and when the fire died out, the glass or earthenware cup was placed upside down on the skin. The flame would use up the oxygen in the cup thus creating a vacuum. The skin rose and reddened when blood vessels expanded, and hence the dark round marks that appear like bruising left by the cups. The process acts as deep tissue massage which is said to alleviate pain and help with scores of medical and health problems, supporters and practitioners claim.

Today, while that method is still used, mostly therapists will use a “pistol pump” or a rubber bulb to create the suction. Cupping is also used combined with acupuncture and massage.

So while cupping may be in the news and trending on social media, the healing art is hardly a phase. Just ask the cupping practitioners in the 941.

Stacie Nevelus’ credentials are impressive, as is her client list.

Nevelus is a licensed Massage Therapist and a national educator with ACE Massage Cupping™ and MediCupping™ and Certified Neuromuscular Therapist who treats professional athletes with acute and chronic injuries. She explains that she was first introduced to massage cupping in 2005, six years after she first became a licensed massage therapist. She described massage cupping as an “ancient modality modernized.” She was soon certified as a practitioner and integrated the modernized healing art into her existing neuromuscular and myofascial therapies. She says the addition of cupping to massage treatment yielded amazing results in combination with deep tissue massage for acute and chronic injury rehabilitation.

Since, Nevelus has treated professional athletes including tennis players, Triathletes, Olympic runners, and MLB and NFL players among myriad of others. Her clients include Adam Jones of the Baltimore Orioles, David Baas formerly of the New York Giants, and Bronson Arroyo currently with the Washington Nationals organization. In fact, as Fit941 goes to press, Nevelus is on the road with the Orioles. Nevelus has worked with MLB clients for a decade, the Cincinnati Reds for three years and she’s been working with the Orioles for seven years. She also has clients throughout the American and National leagues. 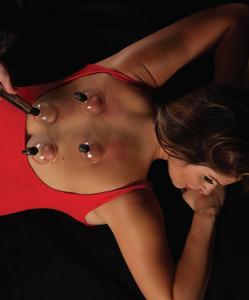 Nevelus explains in more depth how cupping works: “Simply put, a cup is placed on the skin and a vacuum is created using various methods. A warm sensation is experienced as the nutrient rich blood flow is brought to the tissue. The result is softer tissue and a new found freedom of movement.”

There are different types of methodology when using cups, she says. The traditional Chinese method of cupping is “typically used by an acupuncturist or a TCM trained practitioner.”

“This method is culturally rich and dates back thousands of years having been used by not only by the Chinese, but the Greeks and Egyptians to name a few. With this method, cups are often stationary and left on for 15 minutes at a time. This is more than likely the method that was used on Michael Phelps,” she explains.

Her process includes a different application on athletes: vacuum therapy.

“I use the same cups and often a machine to create the vacuum, but apply those using different methods and intentions. I will often glide a cup or park one for two to three minutes on an area to release a tight area or trigger point. I like to think of the cup as a looking glass into the tissue. When gliding over the tissue, blood flow is brought to the area. Gliding the cup can show possible restrictions, adhesions as well as demarcations. Demarcated areas are often indicative of a specific issue causing pain and discomfort to an athlete. Cups can show us a color-coded map of the tissue and where to work specifically to free athletes from nagging discomfort. Any possible resulting cup marks tell a story whether the stagnation is from a new or old issue. If there is not an issue in the area being worked, no stagnation or cup mark will be created.”

Nevelus says when she’s working with athletes, “this information can prove to be very useful.”

“With this information, I can work efficiently and effectively at addressing their issues. My goal is to keep them injury free and on the playing field,” she says. “I have effectively done this for seven years with Adam Jones, centerfielder of the Baltimore Orioles. Athletes like him get the value the addition of this modality brings, to keep them injury free and meet the demands of professional sports.”

Dr. Michele Louiselle of the Center of Integrated Medicine in Lakewood Ranch wants people to know that the ancient healing practice is still used today because it is effective.

“It’s a very old therapy used in Traditional Chinese Medicine and other Asian cultures for a variety of issues … most commonly used for releasing acute and or chronic pain syndromes” and among those, she treats myriad conditions. “Cupping can be used for any kind of pain syndrome no matter the location or length of time that the condition has existed,” Louiselle says.

“We can also use cupping to rid the body of sicknesses such as a cold or the flu, the quicker you treat the faster it resolves,” she says. “From an energetic standpoint, we can use cupping to bring energy to an area or we can also use it to remove energy from an area.”

And, a new trend, Louiselle says, is cupping on the “face as a form of facial rejuvenation and anti-aging.”

Dr. Ricardo Morales, who has been practicing acupuncture, herbal medicine, homeopathic and vitamin injections, guasha, and cupping in Sarasota for nearly 13 years, says he treats people with acupuncture and cupping, and sometimes a combination of both.

Morales says that while “many people don’t really know much about cupping,” he has been asked for the treatment and often will recommend it to patients. He too agrees that despite the fact that cupping seems “trendy now,” it’s an ancient healing art, like acupuncture, that is not a phase or a trend, rather is a process for healing that is here to stay.

Indeed, the list of ailments helped by cupping is a long one, according to CuppingResouce.com, who claim cupping can treat just about anything from arthritis and blood disorders to skin conditions and varicose veins, anxiety and depression to respiratory conditions and toothache. But the Cupping Resource website makes sure to include a disclaimer stating its claims have not been evaluated by the Food and Drug Administration and the information it provides is “not intended to diagnose, treat, cure, or prevent any disease or health condition.”

Seek out highly trained and skilled practitioners like Nevelus, Morales and Louiselle all practiced and in the modality and work safely and professionally addressing individual conditions best treated by cupping.